My name is Boston Jacobs and I am a Parisi Performance Coach at Method Sports Performance. Here is my story…

I grew up in Pekin, Illinois. When I was young I participated in various sports with both parents being collegiate athletes. My dad is the head wrestling coach at Pekin Community High School and also coached football and baseball, so he made sure I was staying active all the time. I started wrestling at about six years old and was not a big fan. Once I got to high school things changed. I ran track my freshman year and played football freshman through junior year. I gave up track after my freshman year so that I could continue to wrestle in the spring and gave up football after my junior year to put all of my time towards wrestling.

My junior year of football I had a helmet to helmet collision that put me out for the last four games and brought on some neck irritation. I continued to wrestle through the pain, visiting the chiropractor regularly to get adjusted. While I was in high school, I got into lifting in the gym in our garage at home with my dad. I was a state qualifier my senior year but was unable to wrestle at the state tournament due to a malfunction of our check scale. I missed weight by a tenth of a pound after never having a weight issue. This fueled the fire and I went to Coe College in Cedar Rapids to wrestle. After wrestling in one tournament, the neck pain finally took its toll. I was pulled out of practice and went to see four different doctors before being told I could die or be paralyzed if I were to continue wrestling. I have two fused vertebrae in my neck, the disk below is slightly bulged, and I have spinal stenosis. Coach Oostendorp at Coe kept me as a part of the team by having me take the guys with skin infections or injuries to the weight room for an alternative workout. I was noticed by the strength coach and he asked if I would like to help out with strength and conditioning for all teams. I changed my major and finished my remaining time at Coe as a student assistant for the strength and conditioning program.

Soon after I was told about my wrestling career being cut short, I was consumed by depression and had a suicide attempt. My suicide attempt led me to pursue art and competing in strongman in order to give myself goals and keep my mind busy in other areas. My tattoo artist and I became good friends and he would teach me about art . While I was in school, I was an apprentice at a tattoo shop but had to give that up due to such a busy schedule. I took up painting shoes by accident and now paint shoes as part of an apparel business. Since then I have taken orders from around the world. Once I finished school, I got a job training people at the gym I trained strongman at. I began strongman because I needed to compete in something after losing wrestling. I’ve had four top five national finishes and two top twelve amateur world championship finishes. I have trained strongman competitors, powerlifters, athletes, and people just looking to be in better shape.

A couple years ago ,I finally decided to share my story on a bl 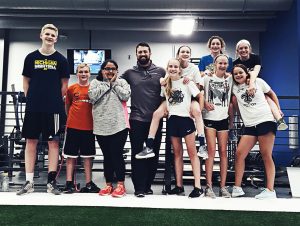 og post and I was surprised by the response I had gotten. I realized what an impact my story could have, so I began speaking events to tell my story and raise suicide awareness. I speak at schools and public venues in order to reach as many people as I can. In 2015, I wanted to get back into coaching kids. I grew up helping my dad with the kids club wrestling so I began doing strength and conditioning for the youth wrestling club out of Coe College. That next summer I started my own strength and conditioning camp for youth athletes out of the gym I trained at and had about 30 kids attend. At the end of 2016 I left the gym and moved back home to Illinois and took a job at Method Sports Performance in Bloomington, Illinois. Since being back home, I have started an adult strength session out of my home gym and training athletes in the area, I have started giving seminars, and I have worked with adults and youth at Method Sports Performance while continuing to pursue my own goals in strongman with my new team under my boss, Chad Coy.

Previous Post: « Optimizing the Big 3
Next Post: Call to Learn More About Our Youth and Adult Total Conditioning Programs!