Get To Know Your Trainer: Ashley Zapotosky

Home » Blog » Get To Know Your Trainer: Ashley Zapotosky 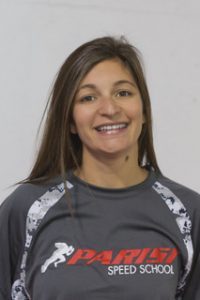 The summer before my senior year of high school, I was the passenger in a really bad car accident that shattered my wrist, the doctors wanted to put pins in which would ultimately ruin my college sports career, however, my family and I made the decision to get a second opinion. Thankfully we did because the doctors at HMC re-set my wrist without surgery and I was able to play college sports!!

I can’t narrow it down to one specific coach because every coach I had in gymnastics, cheerleading, and soccer, always pushed me to my greatest potential and I became an overall better athlete because of it, mentally and physically.

Because Parisi IS MY PASSION!

Change of Direction because it has the most content and there are so many applications to be used!

My brother is a redhead 😀