Football is a game of speed. If your goal is to land a starting position, become an all-star and/or play college football than speed is one of the most important aspects of athleticism that you can improve. In the not so long past, coaches believed speed was something athletes were born with. This could not be further from the truth. Speed is a skill and it can be learned. Not everyone is going to become the next Zeke Elliott, but you can get faster.

Lets discuss how an athlete can improve his or her speed, agility, and quickness. It comes down to improving three aspects of your athleticism, strength, running technique, and muscle elasticity. Here in this first article on improving Football Speed I will address strength for speed. If you want to improve your speed, agility, and quickness you need to be strong relative to your body weight.

When I talk about strength, I am not talking about how much you can bench or curl. I am talking about getting the right muscles stronger to help you run faster. At the Parisi School, we call this “Speed Specific Strength.” These exercises focus on the lower back, glutes, hamstrings, abdominals and upper back. Most high school athletes grossly neglect these muscle groups. I see too many so-called speed coaches going right to agility drills without addressing technique or strength. Many athletes do not have the proper running mechanics or strength-base to maximize the benefit from these drills. Performing lots of agility drills without the proper technique and strength-base, can be dangerous and lead to injury.

The primary movements to build strength for speed are dead lifts from the floor, sled dragging, step-ups, and pull-ups. Here are a few key points about each movement.

First, the Deadlift. Dead lifts can be performed with multiple grips utilizing an Olympic bar. A wide grip (also known as the snatch grip) will enable the athlete to sink the butt lower on each movement, which will challenge the lower back more. A close grip will enable the athlete to utilize more weight and complete the movement with less difficulty. Athletes should start with a close grip and focus on stabilizing the lower back in a neutral spine position (normal slight curves in the back). The back should never come out of this neutral position.

When performing the lift, the motion comes from pressing through the floor and bending at the hip, also known as hinging at the hips (hip-hinge). A good way to find your neutral spine starting position is to lay flat on the floor, on your back. You will sense four body parts that are touching the floor. Your heels, butt, upper back and head. When lying on the floor your spine will be in its strongest “neutral,” position.

When you lift weights you do not want to shift out of this spinal neutral position one bit. You want to brace the spine in this position by activating and firing all the 360 degree core muscles; internal and external obliques, transverse and rectus abdominis, the low back known as the erector spinae and multifidus, and quadrates lumborum.

Another way to explain this is, when you try and open up a sticky jar of jelly, you brace your core by pushing it out, then try and open the jar. Same holds true when you lift weights. If your spine comes out of neutral and you have weight on your back, you will be risking injury to your vertebral discs. The dead lift movement can also be performed with a trap bar, a rectangular bar that you stand inside of. Dead lift movements are the best to strengthen the lower back, glutes, and hamstrings. 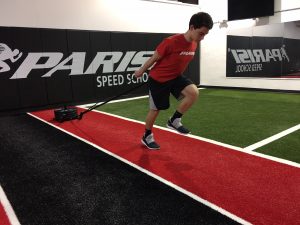 The next exercise is simply sled drags. Most athletes and coaches are familiar with sprinting while pulling a sled. To really strengthen the speed specific muscles (hamstring and gluts) to a greater extent, put heavier weight on the sled and drag it in a walking motion taking long powerful strides.

At the Parisi Speed School, we utilize sleds for walking and running movements. This specific strength exercise addresses the acceleration aspect of sprinting. When you accelerate you need technique and strength to get the body moving to overcome inertia. And sled dragging mimics acceleration technique very nicely. 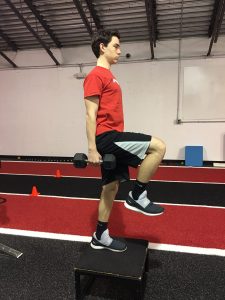 Step-ups are another great movement for the glutes and hamstring muscles. This can be done on a box or bench, which should be about knee height. The weight can be placed on your back utilizing a bar or you can hold dumbbells in each hand.

The key to this movement is to utilize the force from the leg on the box to propel the body up. The most common mistake is that an athlete tends to push off the foot that is on the ground.

To avoid this, keep the toe up off the ground, with the knee locked and straight at all times while having the foot on the ground,. Do not bend the knee at all with this leg and do not push off at the ankle. This will make the leg up on the box perform all the work to lift the body up.

Pull-ups. That’s right pull-ups. Arm action plays an important role when running. Your legs will only move as fast as your arms. A powerful backward arm strike is directly related to how powerful the leg strike is put into the ground. To explain what I mean, think of taking a running stride. As you dive your right arm backward, you drive the left leg down into the ground. A key element to speed is determined by the amount and rate of force that is applied to the ground through the leg / foot to propel the body forward. One determining factor is the force of the opposite arm going backward along with the strength of the lower body muscles that are addressed in the above exercises. The pull-up focuses on strengthening the backward arm strike, a key to transferring force to the opposite leg on every stride. This is an undervalued exercise for improving speed, agility, and quickness.

The challenge is when an athlete tries to perform these exercises, which is not very often, they usually perform these movements with poor technique. Kids are more worried about how much they can bench, so when it comes to other strength exercises, they don’t give them the attention to detail that is needed. This can very easily lead to a lack of focus, which then leads to poor technique and eventually injury. So keep your eyes on the prize and incorporate these great strength exercises into your routine. By knowing how to increase strength the right way, you will see the benefits of increased speed, power and performance on the field.