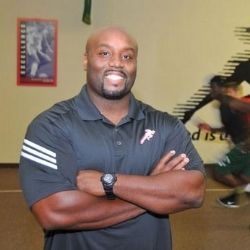 Manny has 20+ years experience in the fitness and sports performance industry. Manny has played basketball and football at the high school and college level. He has also coached basketball and football for high school and youth leagues. He is very involved in his local church, Discover Life Church. Married to his beautiful wife Nicole, they have three young children, Alayna, Xavier and Marcus

Accomplishments: Manny is a well-respected all around athlete. Was a standout high school athlete at Melbourne Central Catholic in basketball and football receiving several honors throughout his high school career. One of his greatest athletic achievements includes recording a Quadruple-Double in a district championship basketball game against Cocoa Beach High School ( 28 pts. 20 rebs. 10 stls. 10 blks.) Manny played 4 years of basketball at Flagler College in St. Augustine, FL. Still active, he continues to play in several recreation basketball and softball leagues. 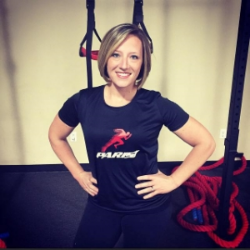 Niki’s athletic career started in her back yard as a child and almost ended there. She never played high school or college sports, as a matter of fact when she and her husband many opened their Parisi franchise, she didn’t think she “belonged” because she wasn’t an athlete. She considered Manny and their other coaches as athletes. The Parisi Team knew athletic success and what it took to get there.

On the other hand, Niki’s doctor’s office had already checked that box on her chart that said “obese”. But in 2014, at the age of 32 Niki decided to reverse it all and get her life back! It was time to dig up the potential she had buried for almost a lifetime! Niki began doing the Parisi XPC adult training program. Since then she has lost over 60 lbs, gained muscle and found an athlete she didn’t know lived inside of her. Niki has a wall covered in 1st, 2nd, and 3rd place 5k medals, children who KNOW when she says anything is possible it’s TRUTH. Niki took it even further when she became a Certified Parisi Coach herself and she has inspired many to begin this very same journey of their own!

When Coach Niki says, “I know it’s hard but you can do it!” It’s because she has been there. When Coach Niki says, “I believe in you!”. It is 100% truth because she knows what it means to be an overcomer. Coach Niki has become a vital member of the Parisi XPC team with her goals of pushing you to your full potential and undying belief that anything is possible if you work for it!
Accomplishments: Mother of 3 awesome children. Has lost over 60 lbs in past 2 years and has inspired many to start on the path to a healthy and active lifestyle. She has several 1st, 2nd and 3rd place finishes in over 30 5k and 10k runs in last 2 years.