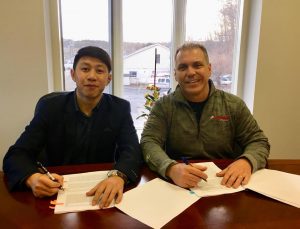 In January of 2018, we were thrilled to welcome Parisi Beijing to the Parisi network. Just over one year later, we are honored to announce that Xiao (Michael) Bo, Owner of Parisi Beijing, is now the official 3rd Party Agent and First Master Coach for Parisi in China. Michael and his company will be responsible for growing the number of locations and the Parisi Brand, as well as certifying new Parisi Sports Performance Coaches.

“There are so many teenagers and younger children [in China] whose physical health condition are under the standard,” says Michael. “Diabetes and obesity are the major reasons behind this problem, and it will have a bad influence on our next generation’s physical health. Many parents find it difficult to find a professional team to help their kids for developing a balanced diet and scientific training plans. We believe the Parisi’s Speed School model will have tremendous success in the Chinese market.” 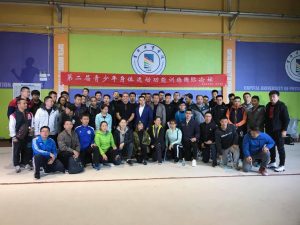 Michael was originally introduced to Parisi Speed School during a seminar in October of 2017 organized by Beijing Institute of Physical Education, “Youth Physical Health and Training,” at which Bill Parisi was one of the presenters. After attending Bill’s presentation, Michael researched Parisi further and felt that the programs were quite well-rounded and something he very much wanted to be involved in. The Parisi Speed School training program perfectly aligned with his goals of cultivating the youth physical heath and lifestyle in his clubs, and he found this to bring tremendous value to his clients and a training experience that did not already exist in Beijing.

Despite the language barrier and a steep learning curve, Michael and his team have not only worked tirelessly to put the Parisi Program fundamentals into place in their facility, but to learn the Parisi business inside and out. Even with the time difference, Michael has developed very close relationships with the Parisi Corporate team in order to keep learning and ensuring he is following the plan to reach success. Michael is now taking the next step to bring our unique training system to the youth all across China.

In preparation for this next business venture, Michael traveled nearly 7,500 miles to join us at the 2019 Parisi Annual Summit in March of this year for a weekend of continued education and networking. Michael has continued to show his belief in the Parisi system and mission, and truly exemplifies what a Parisi Owner should be.

We want to congratulate Michael on his hard work and success in establishing the first Parisi Speed School in China. We look forward to helping you empower the children throughout China and grow the brand in the years to come.

Top Speed Drill: A-March, A-Skip and A-Run
Next Post: School’s Out For The Summer! »