Parisi Schererville is celebrating their 10 Year Anniversary. At year six in 2014, they were considering closing shop. It was at this time that  LJ Mattraw came on as Program Director. At 22-years young, LJ was actually rejected upon first application due to his lack of experience. However, LJ would not give up. He knew this was where he was meant to be.

He was so passionate about training that instead he went out to train his old high school football team. After gaining some experience, he reached out to Schererville again a few months later and was hired. At this time, the program only had a total of 35 athletes. Four years later in 2018, they average 120-130 athletes.

The biggest impact LJ made right away was increasing outreach. You can always find LJ out and about at sporting events in his Parisi gear, demonstrating warm ups and spreading information as much as he could.

He also contributes the explosion of social media to their growth and leveraging digital efforts as another avenue of outreach.

Referrals and word of mouth have also always been key for their success. Over the years, LJ has established great relationships with coaches and other professionals in the the area to help grow their brand even more.

LJ’s biggest piece of advice is to trust and follow the system: 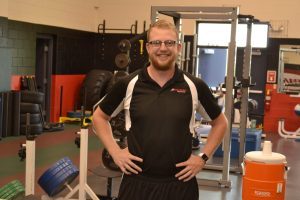 “Everything is laid out for you. You just have to execute. Crush every session. Give 100%. I watch the modules every single day on my lunch break. I’ve seen them all a bunch of times, but I keep learning something new every time. We have coaches meetings every week where we review these modules and practice what we learned. There is a ton of great information at your fingertips. You’re kind of stupid if you don’t use it!”

The Mastery series is one of the first things LJ utilized when he started and he found tremendous benefit in the series and his numerous conversations with Ginger throughout the month. LJ also found great benefit in reaching out to Master Coach, Steve Leo, and even Bill Parisi and Paul Staples to simply learn as much as he possibly could. Parisi Schererville’s success is due to the talent they hire. It’s about the commitment of their team and passion for coaching.

At 26, LJ’s career has catapulted even beyond Parisi with his new leadership position within Omni, a multi-million dollar business. LJ is now leading a team of 54 people. By helping his Parisi program succeed, LJ in turn has helped himself succeed and reach his career goals.

LJ is living proof of what happens when Parisi coaches, Program Directors and owners engage with the online resources and network.