What is power development? Well, it really depends on who you ask. Like many elements of sports performance training, there really is no one right answer.

Let’s Start with the Basics

It’s important to understand the different forms of “power.”

Let’s begin with an essential point – you must respect the complexity of movement and training. The human body and movement are complex topics. But complex problems demand simple solutions. Rather than break down on the million details of the movement, focus on the new elements that coordinate and bring it together.

The goal is to create adaptable athletes – not adapted athletes! How do you do this?  Don’t train in your comfort zone. Strength attractors happen when you test them and challenge the athlete, not when you create training situations where failure is impossible.

But remember – everything has a cost. Training is about tradeoffs. For example, we need overload, but the more we overload a movement, the less specific it becomes. Being aware of these costs can help us make better training decisions. Adaptations occur after stimulus (load) is used in a training session. This adaptation process can vary and is dependent on the right stimulus at the right time.

Simply put, the ability to transfer strength onto the playing field is crucial to athlete success. A lot of coaches might infer that the stronger someone is in the squat and deadlift, the stronger they will be on the field. This is not necessarily the case. We like to use the term “relative body strength” to walk the fine line between being a well-rounded athlete and being a strength athlete.

For field athletes, it’s important to remember that speed training is strength training. Yup, I said it and I meant it. The transfer of strength onto the field is complex, but performing a running analysis on your athlete will expose weaknesses.

Getting the Slack Out

This term is used throughout Parisi facilities all over. It refers to getting that stiffness and getting the muscle to contract. Many of us are familiar with using traditional methods such as plyometrics, Olympic movements, and traditional lifts, but the one that we need to focus on and discuss more are constant variability methods.

This includes using tools such as the ViPR, aqua bags, and sandbags. These methods are crucial because they are unpredictable. They constantly make you navigate the ground. It gives the best simulation of what the athletes would see in the field of play. In fact, even some change of direction drills do not simulate the field as well as these methods do.

Below is a mini cycle that we use in order to incorporate the athletes back between seasons:

Here are just a few of the movements that can be used in order to simulate on field production.

These exercises are crucial because as mentioned before they do much more than just develop strength but they also, recreate realistic on field movement that ultimately makes the athletes better and more prepared. Developing power in different directions and change of pace is just as important as developing pure strength. 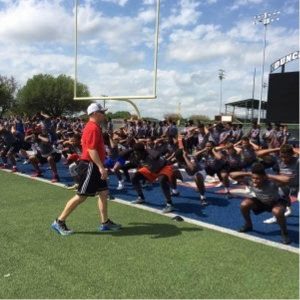 Steve grew up in Hawthorne, NJ where he was a 3-sport varsity athlete (football, baseball, and wrestling). His athletic career was very successful—being named the captain of his wrestling team and receiving all-league honors for both baseball, track and wrestling.

Steve realized sports was his real passion and decided to major in Exercise Science at Northeastern University and concluded his studies with a degree in Sports Management from Centenary College. Steve is the former Director of Training for Parisi Speed School Morris Plains and Fair Lawn NJ.

He has been training athletes for 20+ years on all levels including high school, college, NFL, MLB, US Olympic, WNBA, and MLL. Steve was hired in 2011 to train the New York Jets during the NFL lockout.

Steve is currently the Head of Strength and Conditioning at Gill St. Bernard’s School in Gladstone, NJ. He lives in Rockaway Township, NJ with his wife, Michelle, and their daughters Samantha, 13, and Maggie, 9