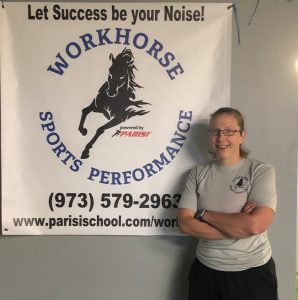 Parisi Sparta has a new face… well, sort of. Victoria Ziolkowski, previous Program Director of Parisi Sparta, has now opened her own facility, Workhorse Sports Performance. After working under Parisi Sparta Owner and Master Coach, Steve Leo, for the past five years, Vicky has taken the leap to open her own facility right in her backyard.

When Vicky originally got involved with Parisi, she admittedly knew nothing about speed. She loved strength training, and that had been her focus for years before joining Parisi.

“I was set in my ways for a while,” said Vicky. “But Steve and the Parisi program opened my eyes to new and different ways of training.”

Vicky admits it was overwhelming, and a lot to learn at first, but Parisi has now become her one and only focus.

When Steve decided to move his facility to Rockaway, Vicky was crushed to be leaving her athletes behind.

“I had such a strong connection with the athletes and my other coaches. The kids are like MY kids. They were texting me how much they missed me and I just couldn’t let them go,” said Vicky.

She saw an opportunity that she just couldn’t let pass by. And that was the creation of Workhorse Sports Performance. 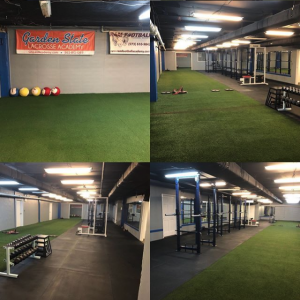 The transition from Program Director to Owner hasn’t come without its challenges, but Vicky’s time working with Steve has prepared her for this venture.

“Steve gave me the ability to run our program how I wanted to. The only thing new I’m doing now is paying the bills,” said Vicky. “I still have the same goals that I had as a PD. I am still hands on ever day. Running evals. Running sessions. The responsibilities aren’t that much different.”

While the stress of managing the business side of her facility might be new, Vicky has a huge sense of pride in finally achieving something she always dreamed of during college.

Vicky’s mission now is to bring a level of training to her athletes that she wished she had received.

“In our area, not every kid has the opportunity to go to college. They may not be the most talented athletes, but they will always put in the work. We have kids getting scholarships to college when before it might not have even been an option.”

100% work ethic is nothing new to Vicky. As an athlete, her nickname was “Workhorse”, hence the name, because she gave it her all every day.

That is the same advice she shares with other Parisi Coaches and Program Directors who may be considering this next step in their career.

“Your whole heart better be in it. You have to be fully invested in succeeding. You have to have the mentality that failure is not an option.”

Is Your Athlete Sore From Training Or Is Their Pain Something More?
Next Post: Training Considerations for Your Youth Athlete