5 Myths and Misconceptions of Speed Training

In every style of training, coaches and athletes tend to hold onto common trains of thoughts as if they are golden rules. Today, we’re breaking down some of the misconceptions we’ve heard about speed training.

In certain situations, this may make sense, but let’s think of our typical athlete – 12-15 years old. Just because an athlete frequently strength trains, doesn’t mean it transfers over to speed training. In Parisi, we believe you need to be “strong ENOUGH.” This means the athlete has the proper strength for their bodyweight and can apply force in the proper directions (muscle coordination).

Think about it this way. If total strength directly related to speed, the guys that can deadlift upwards of 600 lbs would be the fastest in the world. Is that the case? No.

The most successful coach will be able to take both speed and strength and blend it together. The power built in the weight room needs to be properly transferred to the speed and agility movements on the turf by getting muscles and joints to react in the proper coordination patterns.

Strength IS important, but there is a fine line. If crossed, it can do more damage than good. In fact, a lot of football athletes go into college very fast and when they come back a year or two later, their 40-yard dash times have actually decreased as they have spent more time in the weight room.

Myth #2: Frontside and Backside Mechanics – One is More Important.

Some people will tell you it’s more about the frontside, how well an athlete lifts the leg and that better sprinters are more frontside dominant. However, some kids strike the ground really well and don’t have good frontside mechanics. It ultimately comes down to customization and balancing. You need to customize training to an athlete’s strengths and weaknesses with an ultimate focus on keeping a balance between frontside and backside mechanics.

For example, you can have an athlete run a 40 during an acceleration class. Are you training both phases? Yes. The difference is where you are putting your focus. Each drill can be used for multiple purposes depending on your focus of the class.

Acceleration will always have a carryover to top speed, and top speed to change of direction. They are still learning how to apply force, how to rebound off the ground and how to force the muscles to fire at a faster rate.

In the majority of sports (track and field removed), athletes are applying all methods all the time.

As with most training “rules”, this may or may not be true for your athlete. In a session focused on acceleration, this is a helpful “rule”, but can also confuse an athlete if they are running a 40 during this same time.

Better athletes may accelerate for a longer time. The golden rule is to NEVER shut the athlete down just because they reached 10 or 15 yards. You want your athletes to be faster OVERALL, which means higher speed at various distances.

Pure acceleration is starting at 0 mph, such as in track starts, stoppage of play and start of possession.

Overall acceleration is starting with momentum, such as in multi-directional sports. With that in mind, it’s important to teach athletes how to generate more momentum and mechanics from a sub-maximal speed.

Force is a vector quantity meaning it has both magnitude and direction. Just because you drive your leg straight down, doesn’t mean it’s vertical. The leg is actually driving down and back. In a lateral movement, you are driving down and laterally. It is always a combination of the two.

What are some other common myths and misconceptions you’ve heard about speed training? Let us know in the comments! 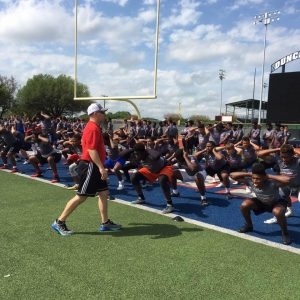 Having worked for Parisi Speed School in Fair Lawn and Morris Plains, N.J., for 15 years as a performance coach and program director, Steve now owns his own franchise location in Sparta, N.J., and assists the franchise corporate team. He holds multiple professional certifications and has years of coaching experience.

Steve grew up in Hawthorne, N.J., where he was a three-sport varsity athlete. Realizing sports was his real passion, Steve majored in Exercise Sciences at Northeastern University and graduated with a degree in Sports Management from Centenary College.