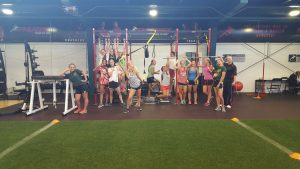 The Parisi Speed School at HealthQuest is located in Flemington, NJ, and opened in March of 2015. Located in HealthQuest Fitness, which is a Top-100 club in the fitness industry for 8 years running, Parisi at HealthQuest has quickly become a part of the community.

While they have only been open a few months, Parisi at HealthQuest has quickly become one of the top training programs in Hunterdon County. They have trained over 500 athletes since their Grand Opening, and will have over 20 new teams beginning their training this winter. Parisi at HealthQuest also won the “Rookie of the Year” award as the top new franchise at the 2015 Parisi Franchise Summit. They are truly grateful for the opportunity to help young athletes achieve their goals every day, and the best is yet to come!