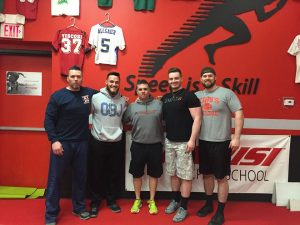 Parisi Speed School of East Setauket is a part of World Gym Setauket, located on the Eastern end of Long Island New York. Parisi Speed School of East Setauket is owned by World Gym owner Tom Jaklitsch and has been in operation since 2009. In January 2015, Christian Becker took over as Program Director after working the past several months as a Performance Coach. Christian took over the program with an enrollment of 50 athletes.

In February 2015, Christian went through the Program Director Mastery Series, which was a huge help in learning the business and operations side of Parisi Speed School. Within a period of 6-12 months, Parisi Speed School of East Setauket had increased its membership from 50 athletes up to 140 athletes… and is still growing!

A huge part of Parisi Setauket’s success and growth in these past months is not only due to its Program Director and support from Parisi corporate, but it’s hard working and talented group of Performance Coaches; Jake Biro, Sean McGlynn and Ryan Whitley who make it their goal to make Parisi the best part of our athlete’s day.

Parisi of Setauket is very active in the community and has been successful in working with our community’s’ local sports teams and clubs. In fall of 2015, Parisi of Setauket established a strong relationship with one of the local travel soccer clubs, which has an enrollment of 1,600 athletes. Parisi currently has over 20 members enrolled in our Speed school from this one club, as well as 5 teams that are currently training at our facility.

On April 10 this year, Parisi Speed of East Setauket will be co-hosting a Health and Wellness Fair for the Non-Profit Organization Rooms 4 Love, which makes bedroom makeovers for children and their families who have been diagnosed with cancer. Overall, Parisi Speed School of East Setauket looks to build athlete’s character and confidence through the knowledge of Parisi’s signature sports performance training.