Hey Coach, welcome back to another Parisi blog series. This round we are going to be talking about the non-negotiables of linear speed. We’re going to kick things off talking about acceleration, and how we can get our athletes achieving high rates of speed.

Now, if you have checked our sports performance mentorship’s ‘trial week’, then you saw that we have two types of acceleration – pure and overall.

Side note – if you haven’t checked out that week, you can access that by clicking here…

Okay. Back to business…the non-negotiable actions that have to occur when it comes to acceleration. Or rather, an athlete expressing acceleration-like qualities in their sport.

The idea of the non-negotiable actions came from a strength and performance coach, Nick Winkleman. Coach Wink talks about how in order to express force and get in to the positions to do so, certain things MUST happen. However, the actions that occur in between can vary greatly.

We actually just had a great conversation on this very thing not too long ago on the Parisi Podcast. You can click here to check out that episode (the Parisi Podcast is also available on Spotify and Apple Podcasts if you prefer that platform instead).

Shameless plug aside, each week as we start to dive in to the genres of speed that we teach at Parisi, we are going to start each week by outlining these non-negotiable actions.

Now, there is a lot of talk as to what a truly optimal body angle is for acceleration. Olympic sprinters have been measured as low as 33 degrees coming out of the blocks.

Is that realistic for a hooper or baseball player? Probably not.

What we can agree on is that a forward body angle allows the lower body, specifically the shin or lower shank (a term you’ll hear us use to refer to the shin), to achieve a positive angle and maneuver in a piston-like action.

Co-contraction or as we call it, hip-lock.

This is something relatively new to Parisi-land within the last 3 years. The term itself isn’t very new, if you’ve followed the work of Frans Bosch then you’ve had this term engrained in your brain for a decade plus. What I am specifically referring to here is the ability to achieve a ‘lock’ at the hip which will help the entire leg ‘get the slack out’ and help apply force, but also achieve a recoil-like effect post-ground contact. 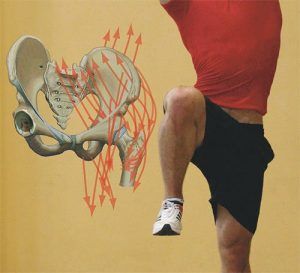 The photo above is an awesome example – thanks Frans Bosch!- showing what happens at the hip during co-contraction. As the glute drives in to extension, the pelvis posteriorly tilts and allows the head of the femur to move alongside the socket which creates a ‘lock’ at the hip. This action at the hip allows the knee and ankle to do their thing at contact with the ground.

That ‘thing’ being a super awesome foot strike…which to us is also a non-negotiable.

The foot strike must be under the hip, or damn near close.

By damn near close I mean that it could be, in theory, slightly ahead of the hip. That position, however, would increase ground contact time and push the athlete more vertical. Definitely less optimal, but being pushed upward is better than striking behind the hip and falling flat on your face.

But on a serious note, we want our athletes to strike under the hip with consistency. This is where our ADW programming can be pretty handy in giving our athletes a lot of low-level and low-amplitude plyometrics to help practice this mechanical skill.

Acceleration boils down to 3 simple concepts for us.

Can we boil these down and go deeper? Yeah, we definitely can.

Vision, mechanical patterns, anti-rotation in the torso, rate of extension at the hip, low heel recovery via knee angles….the list goes on!

What I want you to take away from this concept of non-negotiables is that when we get into the weeds with the infinite list of speed training mechanics, the non-negotiables elements are at the root. They’re the global concepts that all of these smaller concepts lead up to.

Looking for a Parisi Speed School near you? Check out our Location Map.