I’ve been a coach and the co-director with the Parisi Speed School since 2007 at the Memorial Athletic Club. I can honestly say it’s been the best learning experience for myself and the rest of our coaching team.   If you are looking for tried and proven athletic skill techniques come learn from the best. Our team has a passion in working with youth ages 7 – 12 and teens from 13-18 years old. Speed is skill and we can prove it. 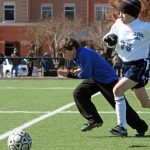 “All Hype or Real results? That’s what we wondered when we first signed up our son Daniel for the Parisi Speed School. Daniel loved sports, but he struggled through his first full season of football. He had a heart of an athlete, but he was undersized and his running style …( if you want to call it a style) was bad. We worked with him on our own but despite our best efforts, he was still slow and appeared to be doing more of a speed walk more than anything that would resemble a running style. He was discouraged but did not want to give up. We enrolled Daniel in the Parisi Speed School mid-way through soccer season and hoped for the best. A month and a half later, I took this picture you see here. That’s Daniel in the blue shirt. Not only was he starting to exhibit a near perfect running style, but he was accelerating past kids much larger and more athletic than he was. The highlight of his soccer season came near the end of the year when he continued to frustrate the star forward on the other team and forced pass after pass instead of score after score. WOW!!!! ” The Baudins 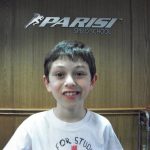 When I started Parisi I thought it would be way too hard for me. I took a lot of chemo when I had cancer and my coordination skills were poor. I remember looking at the cat challenge board and asking Coach Jeff, “how will I ever be able to get to the top level in the cat challenge?”. He asked me what my favorite game was. “I told him I loved playing my Nintendo DSI”. Coach explained to me that Parisi was just like the DSI. In order to get better and better I had to keep practicing. He said Parisi was the same way. It may look hard but you’re so busy having fun and if you keep practicing you will get better over time. It made sense to me. I realized that the only way I would jump to the next level in the cat challenge was to do the same thing I do with my DSI. 1. Play it. 2. Practice it. 3. Work at it. I started the Cat Challenge at level 1, and in just 3 months I jumped two levels. I couldn’t believe it. Coach Jeff was right!!! I raised over to the board and before Coach had a chance I moved my name from level 1 to level 3 on the cat board. My goal is to get higher than Coach Jeff one day.

I never met an inventor in my lifetime. One day my mom told me that the MAC had a special guest, Mr. Bill Parisi and he was the inventor of Parisi. I was so excited. I told all my friends at my school that I was going to meet an inventor for the first time. After coming face to face with Mr. Bill Parisi, my mom asked me what I was thinking. I said to her: “if he can be an inventor, then so can I”. So, if I can move up two levels by just practicing then I will find a way to invent something one day. I had to write a persuasive paper in my school and I chose to write about becoming an inventor. I have a big dream and my dream is to invent. I already have one idea of how I can invent a Parisi game for the Nintendo DSI and the Wii. Anything is possible!!! 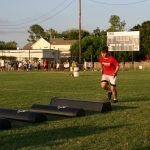 “Just wanted to let you know about one of your students. Randall was timed on a hand held stop watch at 5.6 sec 40 yard dash.
That was the fastest in the 11 & 12 yr old league in football skill evaluation out of 160 kids. Last year he ran a 6.07 sec 40 yd dash.
Thank you Parisi for helping him in the short time you had him this summer to help with his running form!” Ro Royall father of Randall Royall Parisi Speed School @ M.A.C. athlete had this to say about Parisi training..

We recently enrolled both our kids in Parisi (8 & 10 years) & they have absolutely loved it! The coaches are great & we have seen much improvement in their speed, coordination, and strength. Their confidence level has improved greatly as well. Really cannot say enough positive things about the program, wished we would have started our kiddos sooner!

I recently graduated and am in college now, but I spent most of my time in high school at Parisi. It is hard to say the impact it truly had on my life. Chris and the rest of the coaches are truly amazing, not just as coaches but as people. The coaches truly care about your success and your improvement. This isn’t just as an athlete, Chris constantly would ask how my grades are going and encourage me to keep up the hard work. Parisi was an experience that gave me confidence and joy. Because of Parisi I saw major improvement in just over a year. My vertical went from 17 inches to 29.5 inches. My 40 time went from 5.6 seconds to 4.8 seconds. My max bench went up to 250 and my squat went up to 315. Parisi is a one of my favorite places to be and I truly recommend it to anyone and everyone.

What can I about the Parisi program, Chris, and his amazing Coaching team… They have done wonders with our daughter. When our daughter started, her fundamentals were lacking. The team at Parisi trained her for strength, agility, speed, stamina and flexibility… and drastically improved her basics to where the difference was night and day… Other parents noticed the improvements as well… We are so thankful that we met Chris and found Parisi… Our daughter has been attending this program since 2013 and continues to do so… The Parisi team also goes beyond the athletics program and is more like a family… During the recent Hurricane Harvey aftermath in West Houston, Chris and his team reached out to us and other members of the Community to offer assistance. That was truly heartwarming… Great people, great facility, great team… Fully endorse them…

“My daughter, Chloe, has been a steady member of the Parisi Speed School at MAC for 3 years. The goal was to improve her speed and strength in order to to better compete at the super champs level of tennis in Texas. Not only were the instructors knowledgeable in helping Chloe improve her speed and strength significantly, they also deeply care about her as an individual and a team member. Chris has helped with Chloe’s self-confidence as well as develop her to be a strong athlete. Chloe continues to attend Parisi classes even as a senior. We are very glad for Chloe to have had this unique experience. Our family are all members of the MAC and have been for years. I highly recommend this class to high level athletes in high schools and colleges or to teens or pre-teens who want to develop to be a good / outstanding athlete in any sport.” Angelique Sands

Been attending Parisi since I was 12 and now I’m 20 in college, it’s been a great program and experience. It definitely helped me get faster and better with my sports while i was in middle school and high school. Coaches are great with the athletes and encourage them to become better every day. Definitely recommend anyone wanting to get faster, stronger in their sports!!!

I could go on and on about Parisi Speed at MAC but I will keep it simple. It is great. Chris and Jeff have created a program that is great for all ages. Youth speed, strength, agility, etc. is definitely their wheelhouse. Many programs to choose from for all situations. Oh yeah, and they REALLY care about the success of your kid. Blessing to have my kids there.

I cannot say enough wonderful things about this program or the staff! My son has taken private lessons with Coach Chris off and on for almost a year and we have seen a remarkable improvement in his speed, strength, coordination and his confidence. It was truly one of the best decisions we have made! As a bonus, he really loves going. If you have ever considered it, schedule an evaluation you will be so glad you did!

Parisi speed school has been great for both my sons. It’s improved their speed and taught them proper weight lifting techniques. The staff members are amazing. For the past 4 years we driven from Pearland to their place in the MAC center two times a week that’s how much we like it there.

My son and daughter both participated in the Parisi Speed School Program at the Memorial Athletic Club and really enjoyed showing up to work out!! I was shocked and so were the coaches when they asked what my kids did for the summer and I told them it was the Parisi Speed School summer camps that helped them not only as an athlete but their confidence was increased by the work they had done! Love this place!!

We started My son in Parisi at 7. He has ADHD and was not ready to be in the group class setting. He lacked focus and was not confident in his athletic abilities. He was not a kid who pushed himself to excel athletically. We enrolled him in private sessions 2 times per week for 30 minutes with Coach Cobo. It is hard to put into words the amazing transformation we have seen in him. Not only did we see a major difference in his physical abilities, but his focus, concentration and self-esteem went through the roof.

It has been such a great experience for us that we enrolled my daughter as well. They both love coming to Parisi and like my son, we have seen huge improvements in my daughter’s athletic ability.

Chris and all the coaches there do an amazing job of motivating the kids and really making them want to try their hardest to reach their goals. I cannot say enough good things about Coach Cobo. He has motivated my son and encouraged him to set new goals each time he accomplishes a new skill or personal best…highly recommend!!

“Going to Parisi’s Speed School improved my awareness and skills on a 5A state champion Steele Knights team. Parisi Speed School assisted with everything you don’t normally do when you go to the gym by yourself. It helps with flexibility, mobility, form, technique and is very informative about the equipment. Another lesson it teaches you is how to set up a great work out plan that can only benefit your physical training. Parisi allows you to be as succesful as you want to be.
Since my arrival at the Parisi Speed School, I haven’t trained the same since. If you are planning on training for a combine, cross country or you’r just trying to improve a skill or technique then I would simply suggest The Parisi Speed School.”