Wondering if the Parisi Speed School of Franklin Lakes is right for your athlete and your family? Read and listen to some of our parents give testimonials about their experience with the Parisi program!

“I’m not one to write a review online unless someone has really impressed me. That said, I felt compelled to write this about Parisi Speed School of Franklin Lakes as they really exceeded my expectations, earned my trust and made me a very satisfied customer.

I started my son at Parisi Speed School a few years back when he was in Middle School. I was a little nervous that he would be lifting weights too young, but Cory and his team assured me that my son would be carefully monitored and the coaches would make sure he was using proper form to avoid any injuries.

And that they did! They held true to their promise and my son really benefitted from the strength and agility classes – from a physical health and well-being point of view. My son also connected with many of the coaches on a personal level and always looked forward to going to the workouts.

But that doesn’t even scratch the surface on how Parisi Speed School of Franklin Lakes was so impressive. While I was so worried about weightlifting and form safety, it was clear that the Parisi team was also making that a top priority – being laser focused on those important elements. In fact, one of the trainers named Khalil called me at one point with a concern regarding my son’s knee and encouraged me to have him evaluated by an orthopedist. Khalil noticed that my son couldn’t achieve perfect form in some of the exercises – perhaps because of his knee.

I almost dismissed this suggestion because I knew my son had a growth issue in his knee when he was younger, but at the time, the doctor assured me that it would heal on its own and he could do physical activity as long as it didn’t “hurt.” But since Parisi had already earned my trust, I took their advice and brought my son back to the doctor. Sure enough, my son’s knee issue hadn’t healed on its own and even though he didn’t have pain, his knee was in fact unstable.

In the end, my son needed surgery to stabilize his knee and had to take an extended break from exercise. I honestly can say that if it wasn’t for Parisi, I wouldn’t have realized there was still an issue. I suppose I would have figured it out eventually, but it may have been a worse scenario.

Parisi Speed School of Franklin Lakes put safety above profits for me, and for that, I am forever grateful. Unlike many gyms and workout programs, Cory and his staff are the real deal – trustworthy and knowledgeable! They even credited me my account balance during my son’s rehabilitation which is so telling in this difficult COVID time. There is no doubt that I will send my son back once he is 100% healed! I wouldn’t trust anyone else!”

“Cory and his staff at the Parisi facility were instrumental in me achieving my goal to play basketball in college. I started with them as a middle school athlete 11 years ago and still continue to train as an adult. Anyone looking to reach their sport and fitness goals should sign up immediately.” 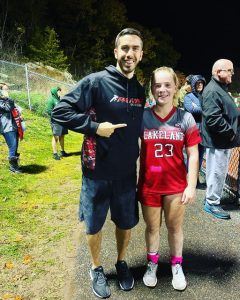 “I’ve been going to Parisi in Franklin Lakes for about 4 years and I absolutely love it. I have never had more dedicated and energetic coaches. At Parisi Franklin Lakes it’s not just about training and leaving. I’ve built not only athlete/coach relationships, but also personal relationships with my coaches. The Parisi Franklin Lakes coaches are completely dedicated to helping me improve in every way possible. Their attention to detail is unlike anything I’ve had in a coach. There’s a reason I’ve been there for almost 4 years and it’s the same reason I’ll continue to come back.”

“My children have been going to Parisi Franklin Lakes for the past 3 years. Their speed, strength and movement have increased tremendously. The Coaches are not only exceptional trainers, but are great at connecting with the athletes. It’s not only a great place to become a stronger athlete but also a great place with great, positive energy!”

Our Coaches / Importance of Strength Training