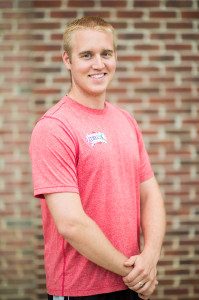 Chris joined the Old Town Athletic Club’s staff after his graduation from the College of William and Mary (B.S. Kinesiology). His love for athletics, training, and kinesiology make him an invaluable asset for the Parisi team. Chris spent his time at college earning his education and playing baseball for W&M. Serving as a three time captain (sophomore, junior, and senior years) he has learned the significance of leadership, hard-work, and respect. Forsten holds the W&M school record for most runners caught stealing with 73. During his high school years, Forsten led Notre Dame Academy to four consecutive VISBA Virginia state championships. Forsten was named first-team All-Virginia in 2006 and second-team in 2005. He attributes much of his success in high school and college to the Parisi program. Forsten states, “The Parisi program was very beneficial in helping me get to the next level. Not only did it make me a stronger and faster athlete, it made me a much smarter one. I know what the Parisi system did for me as an athlete, and as a person, and that’s why I’m back to spread the knowledge and experiences that I had with the athletes of Parisi here at the Old Town Athletic Club.” He also brings valuable insight from his experience with Williamsburg Physical Therapy, working as a physical therapy technician. Working closely with the Tidewater Physical Therapy team in Williamsburg, VA, he has learned a great deal about injury and injury prevention. His background in kinesiology and physical therapy will certainly aid him in his quest to develop well-conditioned and educated athletes. Forsten is very excited to pass along his understanding and passion for speed and strength training in order to develop the fastest, strongest, and smartest athletes who want to reach their full potential. 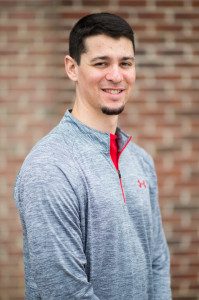 Russell was born and raised in Fauquier County, where he was a four year Varsity Baseball standout at Liberty High School, as well as team MVP in 2008. He went on to play NCBA intercollegiate baseball and become a two year team captain at Longwood University, where he graduated with a B.S. in Kinesiology. While at Longwood, Russell led the lancers to three straight conference titles, as well as the team’s first ever NCBA World Series birth. Shortly after college, Russell helped lead the Kettle Run High School softball team to their best record in school history and first ever conference title, as varsity assistant head coach. The Parisi Speed School has been the perfect platform for Russell to pass along his knowledge and show his passion for teaching, coaching, and athletics. Along with becoming a certified Parisi Performance Coach, Russell has earned his personal training certification through NCCPT. 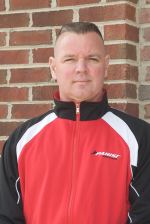 Mike played football, basketball, and baseball in high school, but during college and for thirteen years after he played volleyball. In 1988 he married Kim and in 1989 the couple had twin boys, Chris and Cole. In the early 90’s Mike began coaching volleyball at Fauquier High School. From there, he went on to coach both baseball and football. Mike’s teams were wildly successful. Mike’s baseball team won the state championship in 1989. In 1990 they made it to the state finals, and in 2001 his team was given a bye to the state championship and sent directly to the regional, where they were runner-up. His football teams also enjoyed a lot of success. For three straight years (1999-2001) they were untouchable, winning the county championship every year. In 2003 & 2004 Mike went on to coach the Notre Dame Academy volleyball teams, where they won back to back state championships. Mike’s passion to educate and help athletes led him to open the Parisi Speed School in the fall of 2008. Mike’s coaching philosophy of having discipline, solid fundamentals, striving for excellence, and respect for the game has been proven to work. This approach combined with his ability to motivate has produced many healthy and successful athletes. 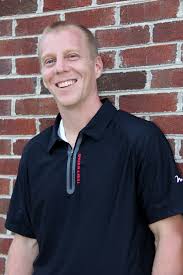 Bryan was born in Richmond, VA, and then grew up in Warrenton with his 7 brothers and sisters. He began playing soccer at the age of five and has played ever since. While at Fauquier High School, Byan played soccer, football, and basketball. Through his experiences, he developed a passion for sports, and a love for competition. In 1999, Bryan received his B.S. in SNFE (Science of Food, Nutrition, and Exercise) from Virginia Tech. Bryan currently coaches at the Parisi speed school with his wife Erin, runs his own business (Blax Construction Inc), and is the head coach of the U14 United with FCSC where he has coached for more than eight years. When he isn’t working, Bryan enjoys fishing, playing soccer, and spending time with his kids! Along with being a certified Parisi Performance Coach, he is also a licensed coach with USSF (United States Soccer Federation). 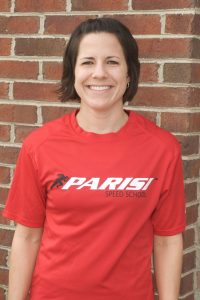 Erin found her love of exercise at the age of seven, when she began taking gymnastics classes. She was the Level 9 All-Around State Champion and represented the area as part of the Regional Team. Erin went on to compete at Radford University. During her summer breaks she worked as a Gymnastics Coach for GMS Gymnastics and Camp Counselor for the GMS Sensory Motor Integration division. It was through this work that Erin gained an interest in working with children. Today, Erin is a certified Parisi Performance Coach, an ISSA certified Youth Fitness Trainer, and an AFAA certified personal trainer. Erin currently resides in Warrenton with her husband Bryan, and their daughters, Ella and Maya. 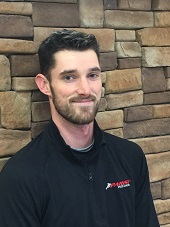 Growing up in Chesapeake, VA Matt has always had a passion for athletics. He played Division I baseball at The College of William & Mary, where he graduated with a B.S. in Kinesiology. While at W&M, Matt earned honors that include CAA Conference Pitcher of the Year, two time CAA First Team All-Conference, and the single-season record for lowest ERA in team history. In 2012, Davenport was drafted by the Detroit Tigers and spent four seasons pitching as a professional in their organization. Matt has since joined the Parisi/OTAC team as both a trainer and performance coach. His passion for sports and training is allowing him to give back to the next generation of young athletes. We are very excited to have Matt’s experience on staff. 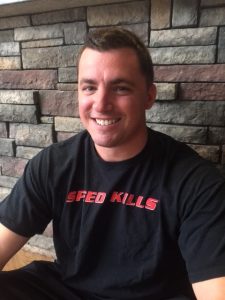 Phillip Brown is from Virginia Beach, where he grew up playing multiple sports. He went on to play soccer at Hampden-Sydney College before serving in the United States Marine Corps for nearly six years. Coach Brown brings some great experience to the Parisi OTAC team, as he has worked directly with athletes in the strength and conditioning programs at James Madison University, Auburn University, and Baylor University (where he even worked with Robert Griffin III). He is very well-versed in speed training, athletic performance, and both Olympic and power lifting. Phillip helped us to launch a new class offering in Winter 2016 (Power Training 201) and has been an excellent addition to the team.