1. At what are should my child choose one sport and concentrate on the skills for that sport?

Basic athletic training is part of every athlete’s routine. Whether they are in youth leagues or an Olympian, so the first step is to be certain that training continues regardless of sports specialization. When the child chooses to concentrate on one sport it depends on the emotional, psychological and physical maturity of the child. However, there is nothing wrong with your child sampling several sports. Specializing in a sport, at any age, is also acceptable as long as the child has made the decision. The more important factor for children is to have fun, especially when they are young. Some children will opt to play two or three sports throughout the year. Whereas some will focus on one. The thing to remember is that if the child performs well, he/she will feel good about himself or herself. Ultimately, that’s what athletics is all about.

2. Why may some of the drills and exercises appear repetitive throughout the program? 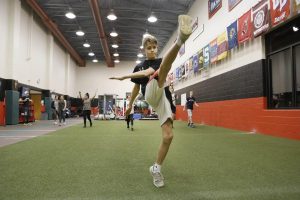 It takes time to build the “motor” engram. The neurological pathway that is created from the brain to the spinal cord to the muscles for technique to become ingrained. Those pathways are built by continuous repetitions of correct movement. Conversely, every time a movement is performed incorrectly, the pathway for incorrect movement is reinforced making it more difficult for children to reach their potential and may promote injury.

3. Why do the trainers talk to the kids so much at the beginning of the session?

The trainers are not wasting time! At the beginning of every session, the trainer is getting information about your child: their physical, emotional and mental state at the beginning of the session. That information is used to be certain that the appropriate encouragement, correction, and the attitude is delivered to the child.

4. Why do the trainers explain movements, why not just do them?

One of our cardinal rules is to explain, simply, why we are asking for the movements and sequences that we ask the children to perform. These explanations are tailored to the the age and experience of the child (children) we are working with, We know that is a child understands that there is a reason that they are doing something it motivates them to perform well.

5. Why is there an emphasis on Change of Direction? 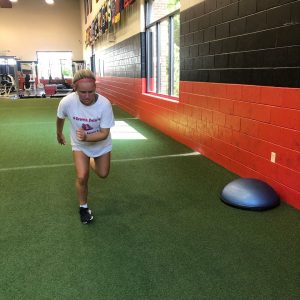 7. Why do you teach Deceleration?

As the child learns for accelerate more effectively, they also have to learn how to decelerate effectively, or else you’re asking for injuries. The Parisi Systems teach deceleration to (1) promote more effective change of direction, and (2) to prevent injuries. Practice and training have to mimic the actual demands of the sports on the athlete- the kids have to learn to slow down and stop and then reaccelerate during play. While it seems counter-intuitive, improving stopping speed and technique not only prevents injuries, but improves speed on the field.

8. What is Center of Gravity Management?

It is a function of correct practice. Top Speed is the maximum speed an athlete reaches when sprinting in a straight line and requires both efficient technique and overall body power. Parisi trainers go through extensive training in diagnosing running and teaching technique.

10. What does Core Strength Mean? 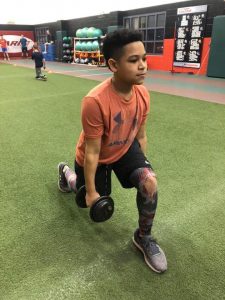 The “core” is the region of the body which is the connection between the arms and legs. Strength in this region is critical for running, jumping, hitting and kicking. A strong midsection is essential to enable the athlete to stabilize his/her body. It also helps prevent unnecessary movement while running at high speeds.

11. Why is upper body strength training necessary for sports like soccer?

Upper Body Strength is necessary for improving speed! The more force an athlete can generate with their arms when running, the faster they will move. Strong rhomboids (upper back) are also necessary for the athlete to sustain proper running position when they are moving at high velocities.

12. When do you work on Flexibility?

Coaches perform flexibility exercises at the end of the session, similar to “cool-down” routine. The exercises are stretches which begin the relaxation and regeneration process of major muscle groups.