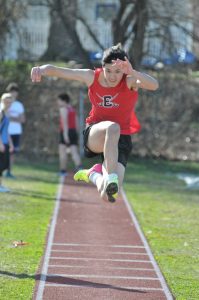 We recently spoke with Kraig Brunelle, father of Parisi athlete, Matt Brunelle. Matt has been a Parisi athlete at Parisi Fair Lawn for seven years and seen great success.Recently, Matt was experiencing pain in his knee when jumping too much during track practice and events. The doctor diagnosed Matt with patella tendonitis. While the pain subsided with some rest, it returned again even without excessive jumps. Matt returned to the doctor, went through an MRI, and was told that surgery was needed as it was an osteochondritis dissecans (OCD) lesion. Not wanting to miss the upcoming season, Matt and his father were hoping to schedule surgery as soon as possible, but were having trouble getting an appointment booked.Matt continued to train with Parisi, and Coach, George Alexandris, noticing Matt improving and getting stronger, questioned whether surgery was actually needed. Bill Parisi happened to be in the facility that night, and recommended that Matt see Dr. Martins at Atlantic Health. Dr. Martins saw Matt within just a couple of days, even during a busy holiday season. Dr. Martins reviewed the MRI and confirmed that it was OCD. Dr. Martins referred Matt to Dr. Scalia, who saw Matt the very next day. 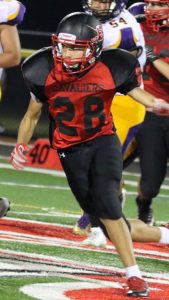 Dr. Scalia reviewed the MRI again to confirm the diagnosis. Knowing how much Matt cared about his track season, Dr. Scalia recommended that Matt continue with Winter Track, as long as there is no pain and he’s not over-training the jump. He told Matt that one day he will need to have surgery, but that it wasn’t an immediate situation. He walked through Matt’s track and football seasons with him to decide when the best time would be for surgery and recovery, to ensure that Matt did not miss too much of the season.Matt and his father had never received such attentive and thoughtful care. The Atlantic Health team took the time to listen, understand and map out a plan that is not only best for Matt’s physical health, but his overall happiness and enjoyment of his high school experience.“When I was told I needed surgery, I was so worried I would miss my senior year of track and football,” said Matt. “If it wasn’t for George, I would have missed this season. He’s been my coach for years and he’s helped me so much.”Matt is currently enjoying his Winter Track season and performing better than ever.