The Fallacy of Try

Home » Blog » The Fallacy of Try

A year ago when I was doing the certification for Parisi Speed School of RI, Bill Parisi, the founder of the franchise, used a pencil to bring home the point about trying.  He held a pencil in his outreached and open hand and asked me to take the pencil.  I did.  He said put it back, and said don’t take the pencil.  So I didn’t.  Next he said ‘Try” to take the pencil.  I took the pencil, which was not trying to take the pencil, but actually taking it.  If I didn’t take the pencil, then I was actually not taking it.  The take home point is there is no try.  There is either you do, or you don’t.  Try is something we manufacture up in our brain, when we need some self reassurance that it is okay to fail, or to give up.  I tried and I can’t.  I have written previously about the dreaded “C” word, and how it limits what we allow ourselves to achieve and it is all just mental garbage we concoct for one reason or another, when we don’t want to put the effort that is required to actually do and accomplish a task.  It isn’t that you cannot achieve something, it is because you won’t.

One of the most often under looked performance enhancers is mindset. Carol Dweck, a Stanford Professor has done tremendous research into this phenomenon, and wrote a book called Mindset: The New Psychology of success. Through her work she has shown how a person’s mindset sets the stage for their goals, either performance or learning related. If you are stuck on a performance goal, and you are afraid you won’t get it, you will avoid all the challenging work it takes to get there. Whereas if you have a learning goal, you will pursue interesting and challenging tasks in order to learn more.  When we teach our children or coach them, it is important we make the process the important part, and not the outcome. If they do not get something, it’s not a can’t, its a not yet.  If they struggle but make effort to succeed, reward the effort, not the end goal.  This is what will keep them motivated and striving to progress.

Your personal viewpoint about your own intelligence and/or abilities has a significant impact on your motivation, effort, and approach to challenges. If we do not shape a more positive viewpoint in kids, reward the effort, make the learning process the exciting part, regardless of the outcome.  We need to stop being victims of the tyranny of now? Do you run from difficulty? If yes, it’s not that you can’t, it’s probably more of you won’t. Whether you have a fixed vs. growth mindset shows how what may be what is holding you back are your own perception and thoughts of your own abilities, and what you could potentially achieve, with a concentrated effort. If you believe you and your abilities are malleable you are more likely to embrace challenges and persist despite failure.  Imagine if our kids had this power?

If we look at this in regards to training or sport, a fixed mindset may try something, and then say they can’t, and keep “trying” but never get it, because in the back of their head they cannot, when really they won’t or don’t want to put the effort it is to actually attain something.  This person sees the outcome as the reward. A growth mindset will see the process as the reward, with the actual outcome, the cherry on top, and will be totally happy, if they never get that cherry.  They will attack the necessary steps needed to potentially accomplish their goal.  In time, they will get it, but it may take time. But the effort to accomplish it, will be there.

Parents set the example for their children in so many ways.  Change your mindset, and help your kids change theirs and the potential is never ending! 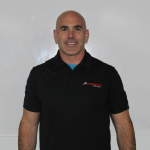 Judah Boulet is the Owner and Program Director at Parisi Speed School of Rhode Island. Judah is a Certified Strength and Conditioning Coach and Head Rugby Coach at Bryant University. Judah holds a Master’s Degree in Pharmacology and Toxicology from The University of Rhode Island a Bachelor’s Degree in Biology from Siena College.